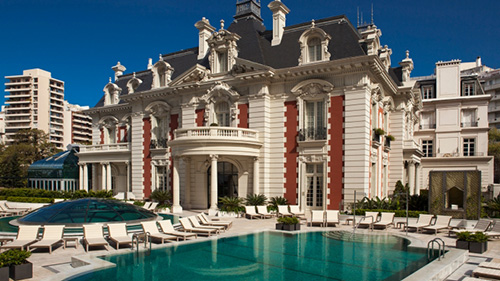 This year, Four Seasons Hotel Buenos Aires celebrates 15 years since its 2001 opening in the city centre. The leader in the luxury segment, the hotel has stood out for innovation, creativity and renewal. Every day, the city's luminaries and guests from around the world gather at the undisputed meeting point of Buenos Aires.

"We celebrate these 15 years of leadership and success of our beloved Four Seasons Hotel in Buenos Aires. The most important thing is the wonderful team we have - that makes the difference in hospitality. They are unique in service, creativity and innovation, and that translates into the absolute market leadership," says Tulio Hochkoeppler, General Manager of Four Seasons Hotel Buenos Aires.
The Hotel offers multiple meeting rooms for corporate and social events, a fully equipped spa and gym and it is the only Hotel in town to have an outdoor pool. Over the past fifteen years, the Hotel always maintained a dedication to the improvement of each experience. Offering a highly personalised service 24 hours a day, combined with an authentic and elegant environment of the highest quality, Four Seasons is a home for those who are far from theirs. Since 2001, more than 800 employees have devoted their attention and service to make the Hotel a unique experience in every detail. Many of them were transferred to continue their brilliant career in other Four Seasons hotels and resorts worldwide.

With its two restaurants and bar, Elena Restaurant, Nuestro Secreto and Pony Line Bar, Four Seasons the choice of businesspeople and top celebrities, plus anyone who wants to eat and drink in a relaxed atmosphere while still enjoying an elegant atmosphere and top quality with friendly prices.
"We push the standards of luxury, offering a professional service like no other. We broke with the idea that a five star hotel has to be a serious and formal place, and transformed it into a meeting place where something interesting always happens," says Gabriel Oliveri, Marketing and Sales Manager of the Hotel. "In this way, Four Seasons Hotel Buenos Aires attracted a new audience to the luxury market, with a young spirit, cool and eager to have fun. We managed to be the first five-star hotel with successful restaurants and successful bar, designed both for the local and international audience. Executive Chef Juan Gaffuri and Restaurant and Bar Manager Mauro Pellegrino are the leaders of this award-winning gastronomic project on the global stage.

Elena Restaurante is the only five-star hotel restaurant belonging to the San Pellegrino 50 Best of Latin America list for the last three years consecutively. Dry aged meats, charcuterie and brasserie are menu highlights in addition to the classic Sunday Brunch. Famous for its quality of food by Chef Nicolas Diaz, its atmosphere, and accessible prices, the restaurant has been packed since its opening. Even a brand new ice cream was created: "Dolce Morte" by Joaquín Grimaldi, Pastry Chef of the Hotel.
Also at the Hotel is Nuestro Secreto Restaurant, with its unique glass design and atmosphere with wood stove, outdoor fire pit, and the best meats in the city. The kitchen is headed by the outstanding Chef Patricia Ramos.
Pony Line Bar created the first gourmet burger in the country. Every night welcomes friends, couples and coworkers who enjoy the best drinks, best music and the polo-themed atmosphere. The DJ Sessions of the bar as well as the gardens were the first to take place in a traditional hotel.

Finally, La Mansión Álzaga Unzué is the iconic jewel of the hotel. Built in 1920, with its own entrance but connected to the tower, it is a special settingsl for the chicest events and to accommodate in its exclusive rooms the major celebrities of the local and international scene.

In the past fifteen years Four Seasons was the only five star hotel transformed twice, showing its commitment to continually offering guests a current product and latest generation technology. Currently, the Hotel is finishing a new refurbishment of Alzaga Unzue Mansion with polished marble floors and Slavonia oak, plus a change of curtains, carpets and lighting.

Four Seasons Hotel Buenos Aires is celebrating this milestone throughout the Hotel at various occasions all year. “We look forward to continuing to celebrate our beloved Hotel for many years," concludes Tulio Hochkoeppler.