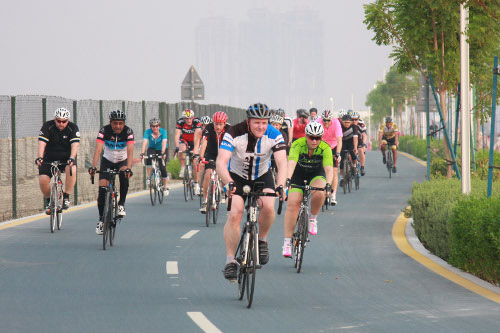 The Spinneys Dubai 92 Cycle Challenge Build-Up rides launched with a spinning start this morning. Over 500 cyclists took part in the first of four organised Build-Up rides in preparation for the 92km cycle challenge on 16th December – now in its seventh year.

The early bird cyclists gathered this morning at Mohammed Bin Rashid Al Maktoum City – District One Cycle Track, a new location for this event, covering 35km as part of their training. Organisers of the event are expecting over 2,500 riders to take part in the main Spinneys Dubai 92 Cycle Challenge in December with those entering coming from all over the world.

Spokesperson for the Spinneys Dubai 92 Cycle Challenge said: “It’s great to be here today at Mohammed Bin Rashid Al Maktoum City – District One Cycle Track, and we are delighted to welcome so many cyclists of all different ages and abilities to the first event of the season. The cycling community keeps on growing in the UAE and it’s fantastic to see everyone train so hard for the 92km event.  The Dubai Sports Council has been spectacular with their continued support and the police and RTA are always outstanding.”

The organisers of the Spinneys Dubai 92 Cycle Challenge have created the perfect platform which caters for all levels of cycling experience. The increase in distance of each Build-Up ride gives participants plenty of time to prepare for the main event and at the same time promotes and practice safe cycling in Dubai.

Juniors also have the opportunity to be involved in the cycling weekend with a dedicated 15km and 30km Junior Rides on Thursday 15th December.

Colette Shannon, Communications Manager, Spinneys Dubai LLC said: “The cycling season is underway and it’s great to see so many people from the community get involved in the first Build-Up ride in preparation for one of the biggest cycling events in the Middle East. We urge all our customers to live an active and healthy lifestyle and the Spinneys Dubai 92 Cycle Challenge is the perfect platform for this.”

Stefan Vanden Auweele, keen cyclist said: “This is my fifth year taking part in the Dubai 92 Spinneys event, the ride was great today and I am hoping to do all of the Build-Up rides and of course the big 92km in December. Racing is always fun and I had a great time this morning.”

Christine Vorsten from South Africa said: “The track here is very nice, my average speed has improved since my first Build-Up ride this time last year which is great to see, I am looking forward to the next Build-Up rides and the 92km challenge. The village here today is great and thanks to Spinneys for the free breakfast, we all love it.”

The second 45km Build-Up ride will be held on 7th October at District One Cycling track. Build-Up rides three and four will both be held at AL Qudra, with the third ride on 28th October on a 65km course, and the fourth one on 25th November on a 85km course.